Posted by Abernethy & Gaudin Boatbuilders Ltd. at 12:15 AM No comments:

Sulhamar is the oldest boat that we have restored and maintain. Over the years we’ve replaced a fair amount of old and tired wood from her.
Built in Vancouver, 1924 she was always a pleasure yacht. At the time she was built she would have been out fitted with a Grey’s Marine engine. Today she looks much like she did in her original beauty. Her bottom however has always been in need of attention. To begin we had to remove the interior to access the rotten wood.
To make the restoration list short I can sat that we did not have to replace the keel. Other than that it's all new.
Sulhamar will get a new engine and systems. This fresh start will make simplify the mechanics and electrical. We will also return the interior to it's original configuration. With the exception of a bucket as the head....or maybe not?
Posted by Abernethy & Gaudin Boatbuilders Ltd. at 9:25 PM No comments:

Last week we began a new build. This is a new tender for Merva. A motor boat that we restored a few years ago. Her tender has always remained with the boat throughout her life. This little gem sat in her cradle attached to the davits on the aft house. We have a picture of the boats, some 60 years ago with the tender on Merva aft house.
The tender is too far gone to serve as a safe reliable ship tp shore vessle so we decided to build a new one using the old one as the template. We have done this before with much success. There are a few changes that we are going to make from the original. The planking will be plywood and there will be no frames. This is to keep the weight down and to make her tough enough to be pulled up on the shore. All of us who own cedar planked boats know precious they are. This tender will be ready for her owner this spring
Posted by Abernethy & Gaudin Boatbuilders Ltd. at 9:14 PM No comments:

"Dreamboat". Not to be confused with the Lake Union boat. This is a motorboat built in Ohio By the Mathews motorboat company.
Our project this summer was the restoration of Dreamboat. A 40' Mathews built in 1939. I believe that this particular design of Mathews was the finest. It really has everything you could want as far as looks and the accommodations is well laid out.
Our restoration consisted of replacing 1/2 of the lower sections of the frames. New garboards and second planks full length, floor timbers. Keel work. side decks. house rebuild and a systems upgrade including new tanks.
The new owners of Dreamboat were a pleasure to work with on this project. Dreamboat can now stand up to her name again thanks to them.

Here is a link to the Mathews Boat Owners Association. http://www.matthewsboatownersassoc.com/
Posted by Abernethy & Gaudin Boatbuilders Ltd. at 8:49 PM No comments:

The 2011 Classic Boat Festival is happening this September 2,3 and 4th, Labour day long weekend in the Victoria inner harbour. The events start at noon on Friday and go until Sunday night. There will be all the usual events such as award dinners and a sailing race. We will be participating this year along with our festival The Open Boat Festival. We will have 10x20 stand stet up on the wharf to display our newly built boats and to meet with boaters.
We are looking forward to this event and we would like to give a very special thanks to the volunteers at the Classic Boat Festival and the people that put the show together.

Posted by Abernethy & Gaudin Boatbuilders Ltd. at 8:56 PM No comments:

We were very excited to hear that LLANORIA (US 83), the 1948 Sparkman & Stephens design, came in third at the 2011 6 meter Worlds in Helsinki Finland.
At the beginning of this year we were a part of the team that restored Llanoria in what I believe to be record time. Her restoration was completed in late spring and shipped overseas to race. Llanoria had previously won at the Olympics in the Summer of 1952.
Thanks again to Jesperson Boatbuilders for the opportunity to work with them on this project and congratulations to the crew who sailed her. 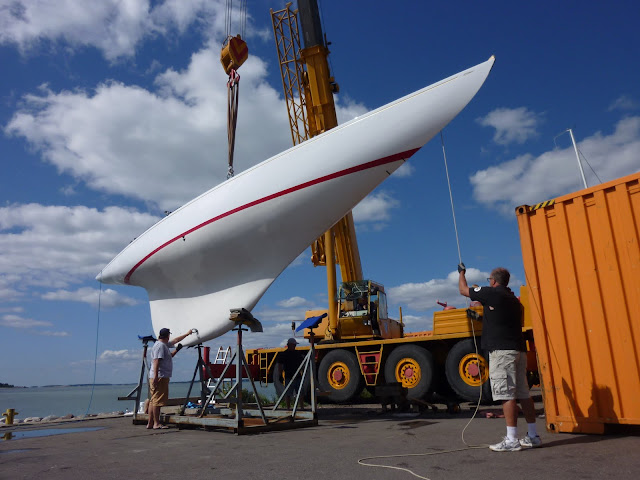 After completing the boatbuilding school in the States, my wife and I were looking for a place to moor our 1939 sloop Sea Witch as we returned to Canada. Brentwood Bay was the closest protected bay close to Victoria on the chart and looked like the obvious choice. At that time I would have never known that my connection to this place would go so deep.

Brentwood Bay must have once looked like a remote inlet, like those found north of Desolation Sound. 100 years ago only a handful of cottages with boat houses were lined along the eastern shore where the ferry dock is now. Getting to Brentwood would have been easier by boat than cart or car.

I have a friend who lives in the cottage that his father built. Jack is in his early nineties and I enjoy every story he tells me about this place. He remembers when young men were going to war; when a basking shark just wallowed up to the beach and when his neighbour went out for a short row and never returned.

In 1999 Jean Gaudin and I started Abernethy & Gaudin Boatbuilders Ltd. in a barn in North Saanich. 3 years later, Gilbert’s was offered to us. We became the third tenants of the waterfront boat shop located in the bay. This shop offered an ideal place for us to do the work we love, and in a location that is at times breathtaking. What we didn’t know at the time was that Gilbert’s boat shop was rich with history and well known to everyone but me. I had heard of the name but didn’t know much about the man or place. What we have found out over the years make us proud to continue the tradition.

Gilbert’s started out as Gilbert's Guide Boathouse in 1927. A sawmill was also built to process lumber for the construction of summer cabins. At that time the marina was built. One of the biggest draws, was the fish - not just fish, but 30lb salmon! Brentwood Bay boasted one of the best places to catch salmon in Canada. Over the years, Gilbert's saw their fair share of notable anglers, including 2 prime ministers Rt. Hon. John Diefenbaker and Rt. Hon. Lester B. Pearson, Oscar Peterson, Gordie Howe, and even a young Shirley Temple.

It was so reliable to land a good size salmon that there was a facility to can or freeze your salmon right there at the marina. Gilbert built guide boats for hire and business was thriving. The boat was a popular sight out on the calm water of the bay. My friend Jack told me that there would be a line up of people waiting to rent these little fish boats. I don’t think that there is anything like that today.

In 1938 the marina was struck by fire and in the reconstruction, a set of ways were built. Likely the same ones that we use today to haul classic boats up to 30 tons. I can only imagine that there was some old engine out of a model T Ford connected to a used logging winch to haul out the boats. Today the winch is still there and a 4 speed transmission transfers the power from a 10 hp 3 Phase electric motor. From the 50‘s to the 70‘s Gilbert's was also home to a commercial smokehouse, freezer plant, the launch ramp. The ramp was condemned and eventually fell apart. That is now the location of our woodworking shop.

Today we have built up the shop as a dedicated wooden boat repair facility. One of our first projects at the shop was to rebuild and upgrade the set of ways. The old set was very worn out by the time we took over. The ways would slip off the tracks often. If it was let down too fast without a boat on it, it would float right off the tracks. This was due to it’s solid wood construction. The new set of ways is built with steel H beam and we use mining cart wheels. The ways was upgraded to todays environmental standards. Gilbert is long gone but I’d like to think he would be proud that we’ve kept the shop up and continue to build and repair wooden boats.
Posted by Abernethy & Gaudin Boatbuilders Ltd. at 10:04 PM 1 comment: